Because I Couldn't Possibly Wait for Summer...

...I went ahead and started on building the warp-weighted loom project today.  I consulted a BUNCH of web sites and looked for sources (books) that I could look to, but the newest books on warp-weighted looms is dated from the late 70s.

Yeah.  And I looked for the Hoffman book, just out of curiosity.  I can get a used copy for $133.  Not happening on my budget.  I'll have to see if the Everett Public Library can get me a copy on inter-library loan.  There appear to be a couple of newer magazine articles, so I'll seek those out as well.


There are a lot of web sites with some research (most based on the sources above) plus looking at extant pieces and experimenting with building their own.  There are differences with all of them, so other than the basic structure, there is a lot of room for experimentation and setting things up so it'll work for you.  I still need to do a little more research on weaving in general--I've only done inkle and card weaving, but this seems to be just a giant inkle loom.  There are possibilities for doing multiple sheds, though--this one I'm setting up to be a 4 shed loom, although the first couple of projects will be 2-shed only.

Here is my process to building the prototype: 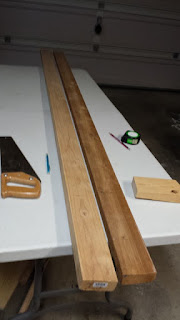 1.  Take two 2 x 4s--I would recommend using two hard wood boards for a "finished" look, although Douglas Fir is certainly more economical and lighter for transport...I grabbed two boards from the rafters, only to realize later that the darker board was, in fact, cedar.  Whoops!

2.  Cut two 2 x 4s to 7 feet long (84").  Other directions said keep the 2 x 4s at 8 feet long and use a stool to reach when weaving.  To that I say, "NO SIR!"  I'm clumsy enough and being only 5 feet tall, I don't need to risk injury.  Again, this is a prototype, so if it needs to be taller after experimenting with it, I can make it so next time.  I doubt it, though.  In fact, I'm thinking that I might be able to make it even shorter by cutting the bottom down another 6".

3.  Next, you take those 12" pieces that you cut off and make the "crotches".  These are the pieces that the top beam rests in while you weave.  It needs to be deep and wide enough for the rod to rest in.  Some directions suggest that you make it vaguely "S" shaped.  Vague, indeed.  Seems mostly stylistic, although the thinner end at the bottom makes it easier to attach to the boards with long screws.  These were shaped using the band saw...I love that toy!

4.  Here the rod is resting in the crotches.  The bottom of the crotch is 16" down from the top.

5.  The next step was about creating the shed rod.  The top beam and heddle rod I bought were 5' long, which determined the width of the frame.  60" long, taking away 4" on each side for overhang, I cut the shed rod 52".  I drilled one hole through and secured it with a bolt and wing nut.  These are meant to be taken apart for transport to events.  I also cut a thinner piece of wood for the top of the frame, simply for stability.  Similarly, I screwed it together with wing nut and bolt (they're WAAAY too long--I'll have to get shorter bolts the next time I'm out at the hardware store). 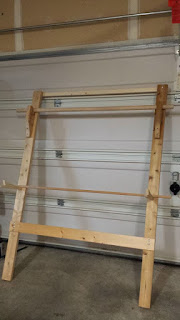 6.  Here she is, standing up!  I'm naming her Frigga, after the Goddess of weaving and wisdom.  There are a few more steps to complete my girl, but it's wintertime and it was just a few degrees above freezing outside.

Frigga still needs heddle rods, heddle rod supports, and weights.  The heddle rods can be scavenged from scraps leftover from the yurt project.  They don't need to be particularly heavy and I have 3/4" sticks that are more than long enough.  I looked for pieces of 7/8" dowels at the hardware store, but they only had 4-foot lengths...I need 5 feet.  Figures.

The heddle rod supports will be shaped from scraps in the bin.  They need to be about 8-10" long and Y shaped.  I can use the band saw again and carve down the point to fit into the holes I'll be drilling on the frame.

Weights are going to be time consuming.  Some other weavers have used 1-pound bags of sand or stones for weights instead of clay circles.  I may go that route, also.  I'm also thinking that I may need to create some kind of support to make it free-standing and perhaps more stable.  This will be a blast to take with me to Ursulmas next year! 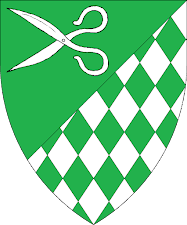